We often face the situation where a particular effect in our imaging data does not survive strict familywise error control, but for various reasons does seem plausible enough to report. In this situation, and indeed in general, one attractive option is to report the entire effect size map of your analysis.

If you want to be able to report the areas that were significant at corrected thresholds also, this is easy to do with a combined map like this one: 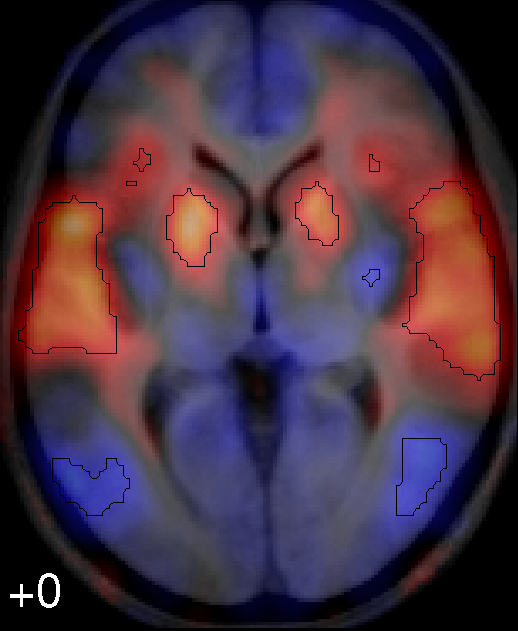 (I used DisplaySlices with a continuous flot.lut colormap for the activation image, and overlaid contours from the SPM thresholded at FWE p<0.05).

The thresholded maps we are all used to can be seriously misleading for localizing function:

The argument in this paper is very simple.

Let's say you only present a thresholded SPM map for task X, and you only found area A activated above threshold. You then say: area A is involved in task X. However, as we all know, just because something isn't significant, doesn't mean it isn't there. So, the fact that A is significant, and the rest of the brain isn't, is perfectly compatible with the whole brain being actually activated, and A being just above threshold due to noise. So, when we say A is activated by X, we are really saying, maybe the whole brain is activated by X, and A got above threshold. We can't even say A is particularly activated by X, unless we test the level of activation in A directly against the rest of the brain. So, A is activated by X, on its own, has very little value for localizing function. Therefore, the classic thresholded SPM has very little value for localizing function.

So, in order to localize function, you need some estimate of what is, and what is not activated. To do this in a direct way, you would have to compare activation in brain areas directly, and this is difficult, and extremely rare. The continuous map on its own does not provide you with such a test, but at least it allows you a preliminary comparison, and makes the problem much clearer.

The unthresholded map is more useful for meta-analysis

This is quoting from an SPM email by Tom Nichols:

In my experience, continuous maps give a much clearer picture of the quality of the data.