There's an issue with Right Red button on button box, channel 16 in the default patch setting. The parallel port inverts this channel (this is a hardware feature of the parallel port, and there for historical reasons, I expect). This causes button presses to be send to the stimulus computer as releases, and the other way around. This issue has been addressed in the latest version of E-Prime, where all 5 parallel port input channels now show up normally. It is important to realise that this invertion only applies to the data being send to the stimulus computer, as this is where the parallel port is being used. The data send to the MEG fif file is completely normal. Presentation deals with this issue in a more simple way: it will only show the 4 uninverted parallel port channels and does not allow access to the fifth problem channel.

Most software will interpret the 16 bit pattern that is present on the STI101 channel in the fif file as a standard, 2 byte integer value. This means that it will be interpreted as 'signed', meaning that it can take on negative values. Bit 16 happens to be the bit that indicates negativity, and this means that your STI101 value will show up as negative whenever the right-red button is pressed. Please note that these two issuea are completely independent: the parallel port issue only applies to the stimulus computer, and the negative trigger value problem only applies to the data in the MEG fif file.

In fMRI the scanner paces the experiment, and your experimental software will have to catch scanner pulses and sync the trials to them. In MEG the recording is basically continuous, so to know when a trial happened, and what was actually presented, you will have to send triggers to be recorded with the brain signals. These triggers will be used as the basis for averaging your trials later, or even online if you want.

Triggers can be send through the NI (National Instruments) card or the parallel port. E-Prime can only use the parallel port, Matlab only the PIO card, and Presentation can use both. We strongly prefer E-Prime, not because it is better, but to make sure everybody uses the same software. On the parallel port 8 channels are available for sending triggers, allowing a total of 255 different trigger values to be send. If you need more, you will need to send several triggers in each trial. In addition, 5 channels are available for responses. The NI card has a total of 24 channels, which can all be configured to be either input or output in banks of 8 channels. At the moment, only two banks of 8 are available.

You have to realise that the MEG acquisition software will only recognise something as a trigger when it is preceeded by a pattern consisting of all zero values. You do not necessarely need to zero out all channels on the parallel port, as the software can be configured to only look at a subset, in which case only these need to be set to zero before the trigger is send. Normally it is more practical to just set all 8 bits to zero at once.

There's a box on the wall, above the stimulus computer, to which the trigger pulses have to be send. Two other boxes are connected to the parallel port and the eye tracker. The appropriate connections can be made with BNC patch cables.

These boxes can be used to either send triggers to the acquisition machine, or to receive input from, for example, one of the button boxes. I'll further explain the situation for the parallel port, as this will be the one being used most.

From E-Prime a single number can be send to the parallel port. More details about this are given below in the next section. Important is to know that the single number send will be represented binary on the 8 output channels. This is the reason why only 255 values are available as triggers.

The EN trigger box is connected to an identical box that lives in the stimulus cabinet, which is a metal cabinet that has a connection to the inside of the MSR (Magnetically Shielded Room). Equipment that needs to be fed into the MSR, like button boxes, needs to be placed in the stimulus cabinet. It can then be connected to the EN trigger box inside the cabinet. 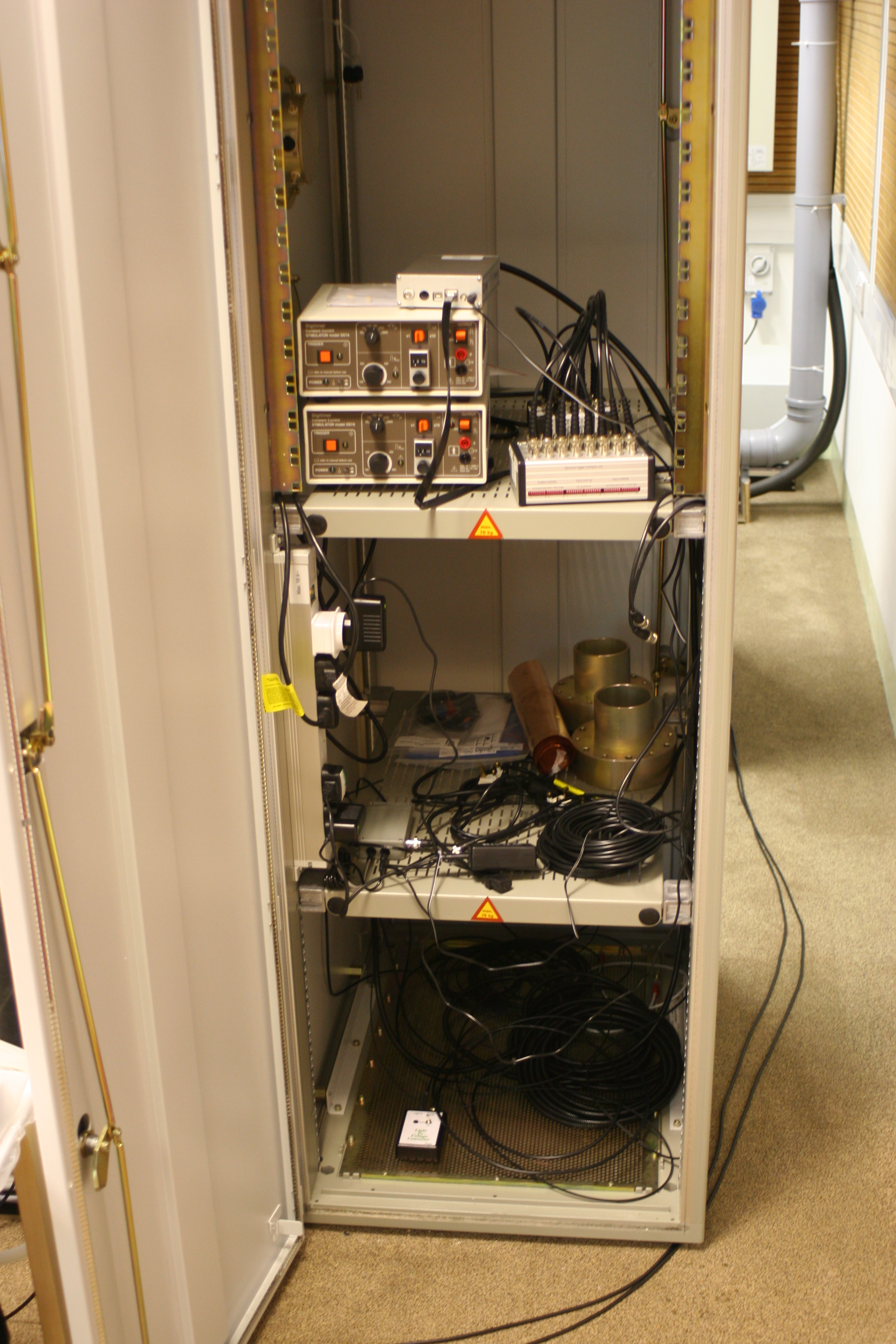 The two boxes, in the cabinet and on the table, will normally work in 'mirrored mode', which means that everything that happens on one box will be mirrored on the other. In that way a button box can be connected to the stimulus computer via these two boxes.

You will have to be careful, though, as these two boxes can also be used in independent mode. The mode is switched by selecting a different channel in the channel selection dialog of the Neuromag acquisition software. The EN manual has this entry on the issue:

To get triggers to be send at the right moment the SignalData mechanism should be used. This takes into account delays caused by disk access and other processes. Using this mechanism the trigger will be send at the moment the stimulus is actually presented, enabling millisecond precision.