You are not allowed to do login on this page. Login and try again.
Clear message
location: MDsystem

A number of regions in the frontal and parietal cortex show extreme domain generality, with a similar pattern of activity for many different kinds of cognitive demand. We call this multiple-demand or MD cortex.

To define MD regions, activity can be averaged from a diverse set of tasks. Seven tasks were used in:

The full unthresholded volume can be downloaded in Nifti format from this link.

The units are t-statistics from contrasts that isolate cognitive demand, averaged across the seven tasks. To create a symmetrical volume, data from left and right hemispheres were averaged, then projected back to both hemispheres. The figure below shows the main foci of the multiple demand system when this volume is thresholded at a value of t>1.5. 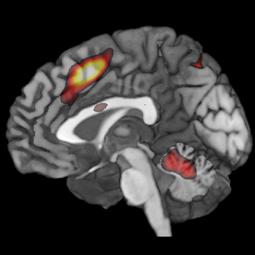 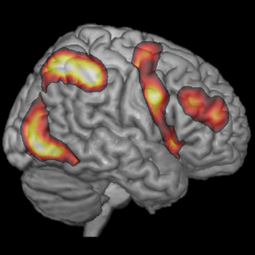 The next figure shows a parcellation into regions of interest (7 of 27 clusters are visible), after thresholding at t>1.5. If a cluster contained multiple peaks that also survived t>2.7, then the larger cluster was subdivided, assigning each voxel to the nearest subregion at the higher threshold. 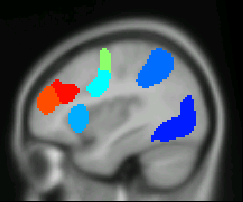 A volume that assigns unique numerical labels to each of these regions of interest can be downloaded from here.

A similar network might be predicted in non-human primates, who readily perform similar tasks after training. Unfortunately, practical constraints of scanning behaving animals make it challenging to identify a macaque MD network using a similar method of combining domain-general responses to cognitive demand. However, co-activation of human MD regions during rest suggests an alternative strategy.

We sought to identify a macaque counterpart to the human MD system using fMRI connectivity while monkeys were lightly anaesthetised, based initially on standard anatomical comparative mapping:

This first approximation of macaque frontoparietal MD regions can be downloaded in the space of the 112RM-SL template (McLaren et al., 2009; Saleem and Logothetis, 2007), and the F99 brain.

We then refined these foci using an iterative approach to find the voxels local to each region that were most connected to the rest of the network:

These optimised regions can again be downloaded in the space of the 112RM-SL template, and the F99 brain.

Finally, whole-brain connectivity maps from the optimised regions were combined, thresholded and parcellated: 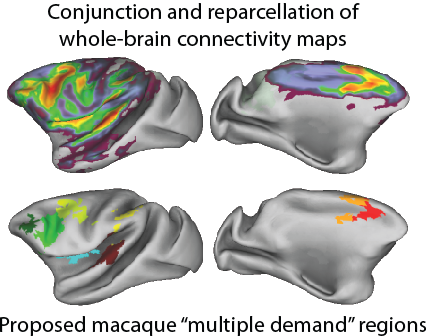 Download the conjunction connectivity map in the space of the 112RM-SL template, or the F99 brain.

Download the final proposed macaque MD ROIs in the space of the 112RM-SL template, or the F99 brain.

Note that the parcellation was performed in the volume rather than on the surface, and alternative divisions are possible. Note also that the parcellation includes a cluster in the lateral fissure, which does not match human MD regions and may not be part of the core network. The two smallest clusters did not contain any voxels significantly connected to all MD ROIs, and were discarded.

To recreate the figures above, viewed on the F99 surface, download and extract this zip file, and open the .spec file using Caret (http://brainvis.wustl.edu/).